As of November 30, 2018 I purchased these two Bluesbender bodies from forum user Gonkulator; this is posted just on the next day:

I'm not entirely sure what I'll be doing with these bodies yet; the one with the large rout may get 3 pickups and I may have to fill in some wood where the bridge and tailpiece would sit. I may try something different there, however.

Looks like a fun project!! Please make a new thread when you start these.

Glad you grabbed these! I just don't have time anymore for projects like these. It'll be cool to see what comes of them!
Top

Well, they just arrived today; thanks! I'm glad I picked both of them up too.

Body 1 (with the large rout) seems to have a finish that was put on in the 70s.
Body 2 is three different pieces of wood.

Any idea why #1 has such a large rout that extends to the bridge and tailpiece? I guess:

Look at Sumlin's Brass Rail under the pickguard for a comparison to Body 1: You can't tell easily from the photograph but there's a channel just ever so slightly lower than the rest of the rout where a long piece of wood could fit in that would definitely be for a set neck (but one that's much longer than many other guitars, I'm guessing; like the Brass Rail model.)

I took apart my Brass Rail Deluxe a bit to compare the body with the guitar; on my Brass Rail, the neck wood extends under the pickups all the way to the bridge and underneath part of the tailpiece (judging by the outline of the finish cracks) but no farther. I'm thinking that Bluesbender Body #1's more likely a mistaken body instead of a guitar meant to be a set neck model; After all, didn't the Brass Rail had to use Wenge to counteract the weight of the neck? I'd have thought they would have re-used the body even after this issue if it wasn't too difficult for time constraints to repurpose it.

3: This was a Blues Bender body that was practiced on before building Brass Rail models.

One other thing; Body 1's paint is where the would-be set neck would have sat. Last I checked, you're not supposed to glue on top of paint. Mosrites bring up all sorts of questions.

For Body 1 I might leave most of the finish. I'll need to install new wood and/or metal where there is none in the bridge & tailpiece area and I may make a larger tailpiece to cover the new wood. I'm not sure whether or not I'll give the body more weight by putting more wood in most of the rout but I'm sure I'll be using a large pickguard like the one on Sumlin's Brass Rail: Body 2's going to be a lot simpler and more conventional from the stage it's at; as far as the body goes the only unusual thing I have to do is fix a little glue separation at the edges.

A few hours later and I'm considering painting the second, unpainted one in a Strawberry Red or Firethorn Red (which is an automotive color that was on Pontiacs in the 70s.)

First, I saw this Stereo 350 which looks nice to me (though it's a little too dark, IMHO: )

This one looks nice too:

I've seen Tym's unusual Blues Bender with active electronics (like my Brass Rail but back to color, his - at least in this pic - is also a little too dark) I had already seen a 1977-79 Pontiac Catalina in Firethorn Red: 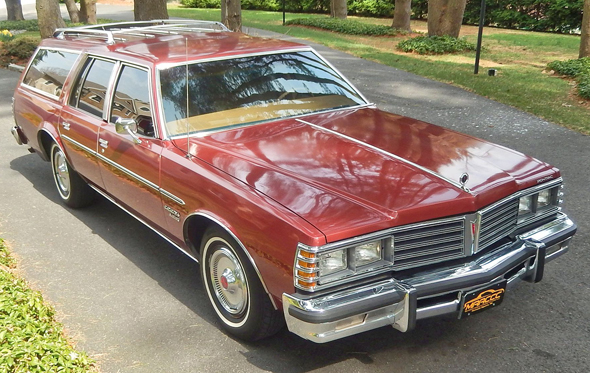 A different car (same year range but not the same year or the same car) in some darker light: By now you might see this can be a nice deep color. I'm not sure how well Automotive paint can work on a guitar, though (or if it's even compatible outside mixing a custom batch up.) This general red color sounds great to me for a Blues Bender. I'm not sure if I'm going to make it a solid or burst finish.

I've asked Ed Elliott about the rout on the one that was routed funny, and here's his response:

Ed: "Hey Austin, it's not a Bluesbender or Brassrail, some kind of prototype, I remember seeing about 10 of these hanging on a line in the back of the shop I think it was 1974. The top horn is a lot rounder than a Bluesbender. Never saw one put together."

Me: "Ed, perhaps this is a precursor to the Brass Rail (without the brass,) considering what seems to be a super long neck rout? I know my Brass Rail's neck wood extends to the bridge, like this body, so that's why I'm guessing this."

So, holy amazing. Both of these bodies aren't Blues Benders, Brass Rails, or S.M. models; they're two of 10 or so bodies that have no name, and it's possible that Semie was trying to make a guitar with increased sustain, but he may have had these first. Wow.

I still haven't done anything with them, but they're no worse for wear. I'm kinda glad I didn't do anything with them yet, this changed everything. I may build big rout to have a long set neck like what may have been intended at first, but I don't know what to say about the one that only has a control cavity rout.

Well isn't that interesting! I never thought to ask Ed about these bodies when I had them, I figured they were just unfinished projects that Semie never got around to.

It's fun to wonder what these would have become had he finished them.
Top
Post Reply
8 posts • Page 1 of 1

Users browsing this forum: No registered users and 70 guests