I found a Craigslist ad that stated a Roesac Malibu guitar 55 Head (pictured below) was made by Mosrite. 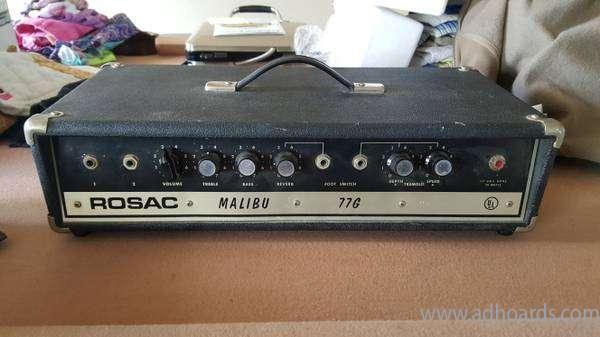 I was wondering if this were true so I did a little digging. I found little for "Rosac" on the forum here so I looked at a topic at Surfguitar.com and eventually found this; ultimately, the Craigslist ad isn't right but Rosac is associated with Mosrite:

"Rosac Electronics was a company based in Bakersfield, California, and named after its founders Morris Rosenberg and Bernard "Ben" Sacco (1922-2009).

Rosenberg and Sacco had been in the army together during World War II and both lived in New York, but moved to California where they founded the Sierra Bag Company (recycling burlap bags) in 1947. Later on they founded a few more companies like the Sierra Iron and Metal Company (recycling metals) in 1959. Morris Rosenberg retired in 1985 and the Sierra Bag Company was sold, but Ben Sacco founded a new company, Sierra International Machinery in 1987.

Through mutual friends, Ralph Scaffidi (a trumpet player) and Mary Osborne (a famous jazz guitar player), Ben Sacco knew Semie Moseley of Mosrite. Mosrite filed for bankruptcy in februari 1969 and within one week a new company was started by 5 partners with money of and in a facility from the Sierra Bag Company: Sierra Electronics. One of the first products was the Sierra Electronics Nu-Fuzz, a new design Ed Sanner was working on when Mosrite went under. Because there was already another company that used the name Sierra Electronics the company name changed into Rosac (after the owners of the company) about one month later.

The whole company was contained in a single warehouse on East Brundage Lane that was not bigger than about 40 by 20 yards. Everything was done in that building: the wood shop, cabinet covering, final assembly, electronics, shipping, inventory and a place for the technicians, who worked on new designs while they fixed amps and guitars that came back on the famous lifetime guarantee.

Several people who worked for Mosrite also worked for Rosac, including the designer of the Fuzzrite, Ed Sanner, who also designed the Rosac effects and Ken Gilstrap, who was plant manager at Mosrite and the first manager of Rosac. Around 1971-72 they both left and started their own company building SanGil amplifiers.

First Rosac only sold the Nu-Fuzz which was a Fuzzrite with tone control, later wahs came into demand so they designed a pedal to do both wah and fuzz. The Nu-Wah sounded great if you used it carefully, but the treadle often "derailed" when used with too much enthusiasm. They sold like hot cake, but a lot of them came back for repairs.

After a while Ralph Scaffidi became General Manager and he convinced the owners to let him run a series of amps that used better speakers and upgraded circuitry under the name Osborne after his wife Mary Osborne, who came in to test every one of them.

Rosac bought a huge lot of Philips and Eminence speakers to use in new amp designs, but the company closed around 1978-79, right when they had a contract with Montgomery Wards for a small and cheap amp for beginners and a new mid sized amp ready for production. The last 10 employees were fired, except the son of Sierra/Rosac Controller and CPA Bookkeeper Dorothy Smith, who always took good care of the employees (thanks to her there were separate bathrooms and a good cooling system). It took him 2 years to sell the huge inventory."

Users browsing this forum: No registered users and 5 guests